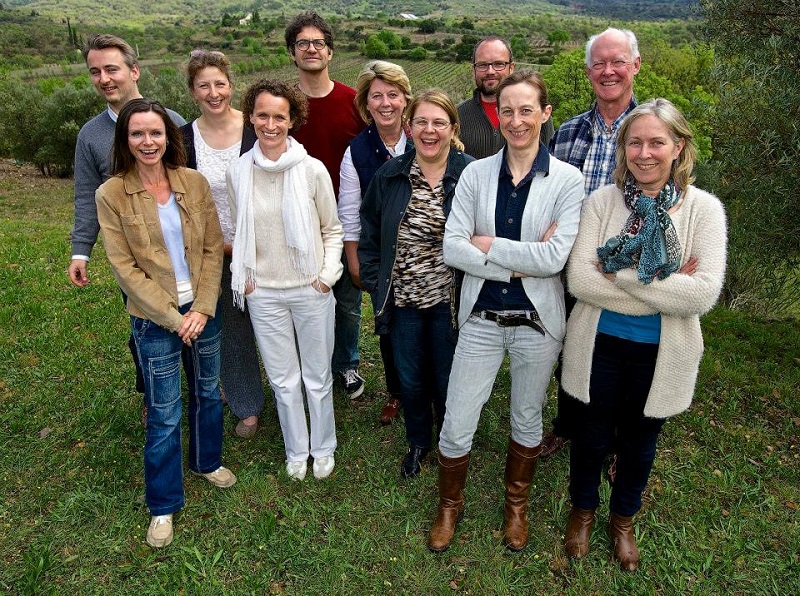 The Languedoc region of France has long been misunderstood.

Since the times of the Romans in the 1st century BC wonderful wines have been created from this diverse and beautiful land.  The territory has been fought over by the Aragon Empire of Spain, the Cathars, and the Catholic Church.

When the Canal de Midi was completed in 1681, it opened up a vast new market for the wines of the Languedoc and production took off, only to be halted by the devastation of phylloxera.

But, these hardy vingneron were not to be foiled by a measily louse and by 1900, the Languedoc was the #1 supplier of wine, responsible for half of France’s production, giving rise to the idea that there was quantity, yes, but not a lot of quality!

Since the 1980’s, lower vineyard prices and less strict production rules have attracted a new breed of winemakers and growers – rebels who play against the status quo.  They don’t care if their vines are grown in ‘special’ AOCs or their wines made from sanctioned varieties.  They care about creating amazing wines.

This ‘maverick’ spirit has given rise to a small and talented group who call themselves the ‘Outsiders’.  With a logo that states “Rocking the Wine World- from Languedoc-Rousillon” they are getting the attention of respected critics and journalists such as Jancis Robinson, Tim Atkins, Andrew Jefford, Wine Spectator and the Guide Hatchette , all of whom are singing their praises.

You’ll find the Languedoc in the southwestern part of France, along the coast of the Mediteranean and bordered on the north-east by the Rhone Valley, and on the south by the Rousillon.

As far as wine is concerned, the area is divided into three sub regions:

The Coastal Plain, is a relatively flat area that caresses the Mediterranean from the Rhone estuary to the old Roman capital of Narbonne. Crisp whites like Picpoul and Bourbelanc thrive, but you’ll also encounter fantastic Mourvedre.

The Mountains and Hillsides, is where you’ll find 75% of the vineyards and wineries of the Languedoc, nestled into little mesoclimates of shale and limestone soils.  Big, bold reds dominate, many reflecting the racy minerality of the soils.

The Atlantic Corridor, near the famous UNESCO World Heritage city of Carcassonne., is where the Atlantic winds and soils meet those of the Mediterranean, bringing a Bordeaux influence to the wines. Here, Cabernet Sauvignon, Merlot and Cabernet Franc have found a home alongside the sparkling wines of Limoux. 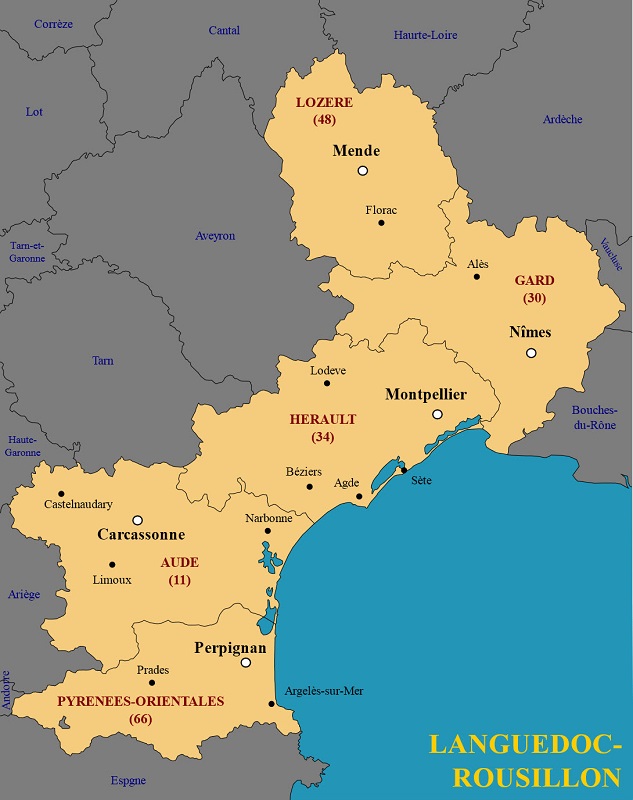 The weather here is a bit ‘dissident’ as well.  Although the region sees 316 sunny days per year, it are also susceptible to incredibly violent rainstorms that, if they should occur during crucial periods of the vines growing cycle, can devastate that year’s production.

The Mistral wind is influential, as it is in the neighboring Rhone Valley, but the Languedoc is also impacted by the Tramontane, a wind that is cold and fierce, pushing from the Atlantic through the Pyrenees.

Both winds have their good side: clear skies, cooling temperatures on warm spring days and keeping moisture in the vines at bay, but they can also be destructive, damaging vines and even uprooting them.

Another benefit – these winds enable Organic Vineyards to flourish.  The Languedoc is home to 1029 Organic producers, the most in France.

The largest in both volume and acreage is the AOC/AOP Languedoc, created in 2007 to replace the old AOC Coteaux du Languedoc.  Both names can be used on labels until 2017.

Reds and rosés are blends of at least two grapes, predominantly Grenache, Syrah and Mourvedre with perhaps a little Carignan and Cinsault.  Whites may be crafted from Bourboulenc, Grenache Blanc, Roussanne, Marsanne, Rolle (Vermentino), Clairette and Picpoul.

Just to complicate things a bit more, there are also 13 districts that are allowed to add their name to the label, such as La Clape, Pic St Loup, to name a few.

At the top of the Appellation pyramid are the AOCs – areas that have special characteristics, geography, soils, and other qualities that set them apart – Picpoul de Pinet, Faugeres, Minervois, Corbières, Limoux and many more.

The IGP (Indication Geographique Protegee or Protected Geographical Indication) used to be known as Vin de Pays.  Of all the AOC levels, this is the one that encapsulates the ‘renegade’ feel of the Languedoc. 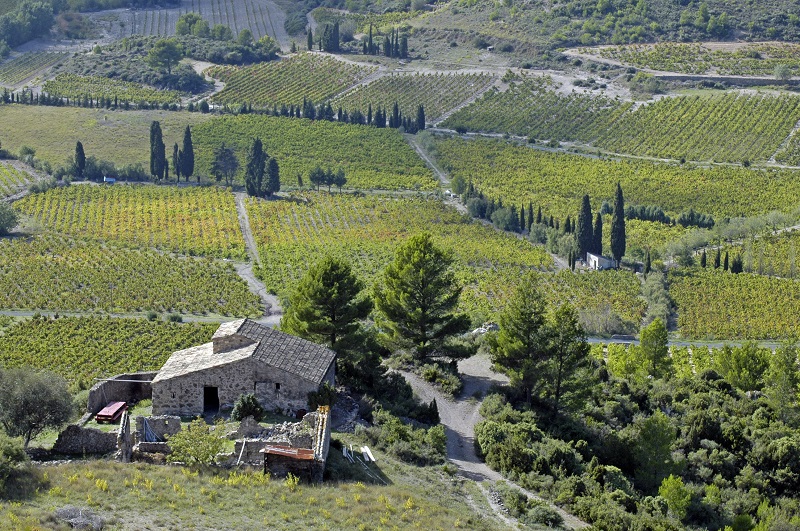 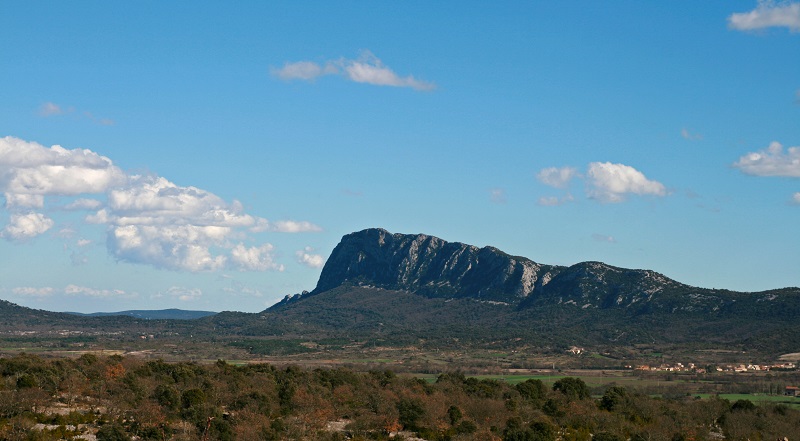 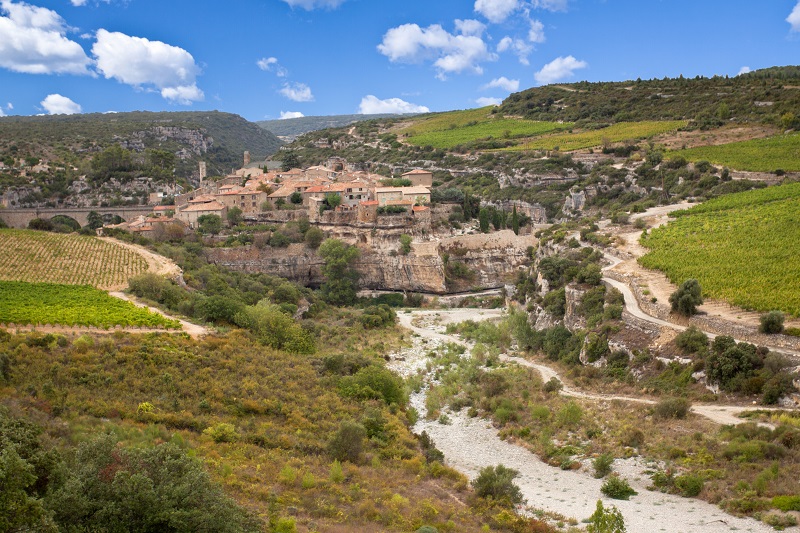 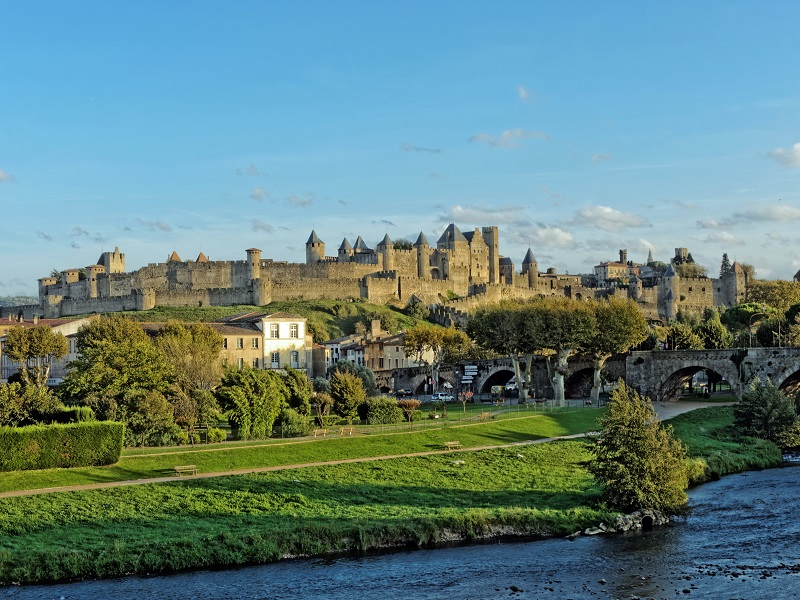 The Chateau of Puissalicon in the Languedoc 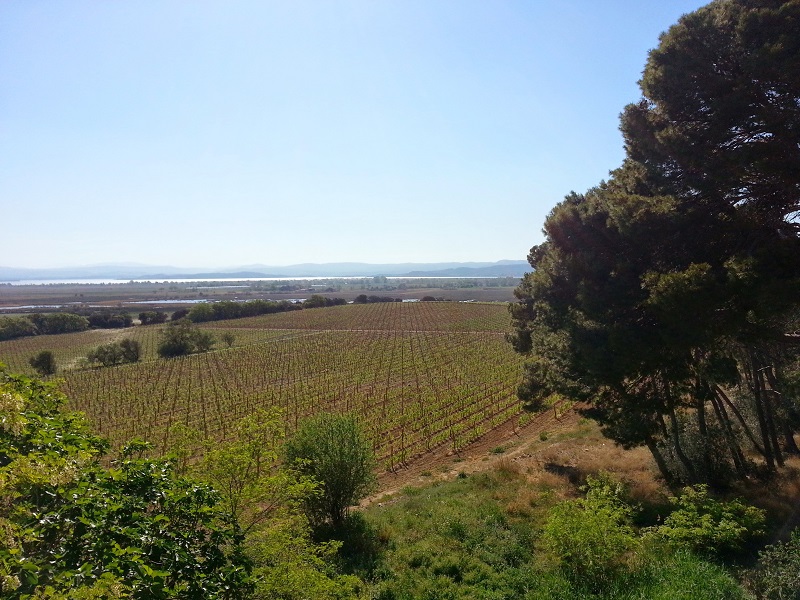 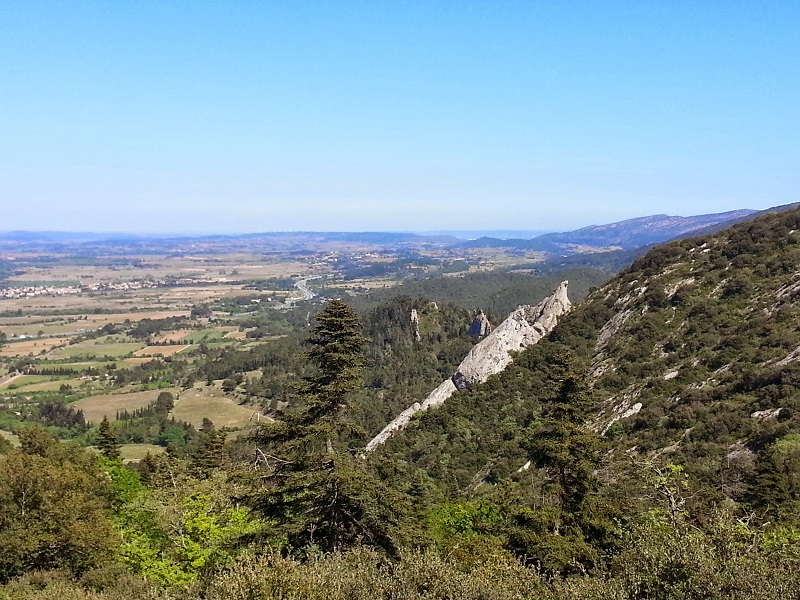 Originally created in 1979, the laws were revamped in 2009.  Now, there are stricter standards of production, more controls and higher certification levels for growers and producers, guaranteeing quality to the consumer.  The wines must originate from specific zones, be made of authorized grape varieties, have minimum alcohol levels and be approved by a tasting panel.

In the Languedoc, this means a lot of creative freedom as there are currently 56 sanctioned grape varietals from which to choose.  Growers can irrigate, which is almost unheard of in other regions and Winemakers can create any style of wine they choose.  And, most valuable to those who export to the New World, they are allowed to designate the vintage and grape variety on their labels, making the wines more ‘consumer friendly’ in places like the United States.

The ‘Outsiders’ are as distinct, individual and compelling as the region they now call home.

In my next article, we’ll meet some of them, find out why they left their safe and secure lives to follow their dreams and learn more about this wild and vibrant region.

Hilarie Larson
After settling in Southern California, Wine Educator and Sommelier Hilarie Larson and her husband, Winemaker Craig Larson, decided to create their own venture, Northwinds Wine Consulting, in order to share their devotion for all things wine. The Larsons bring a deep appreciation for the love and labor that goes into every bottle and are thrilled to express that passion through wine education and winery consulting.
You might also like...
GrenacheLanguedoc
MORE
Read More
325 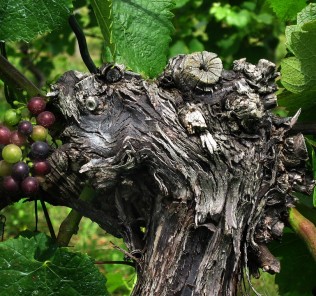 List of Wines Cited As Having High Arsenic Levels
Next